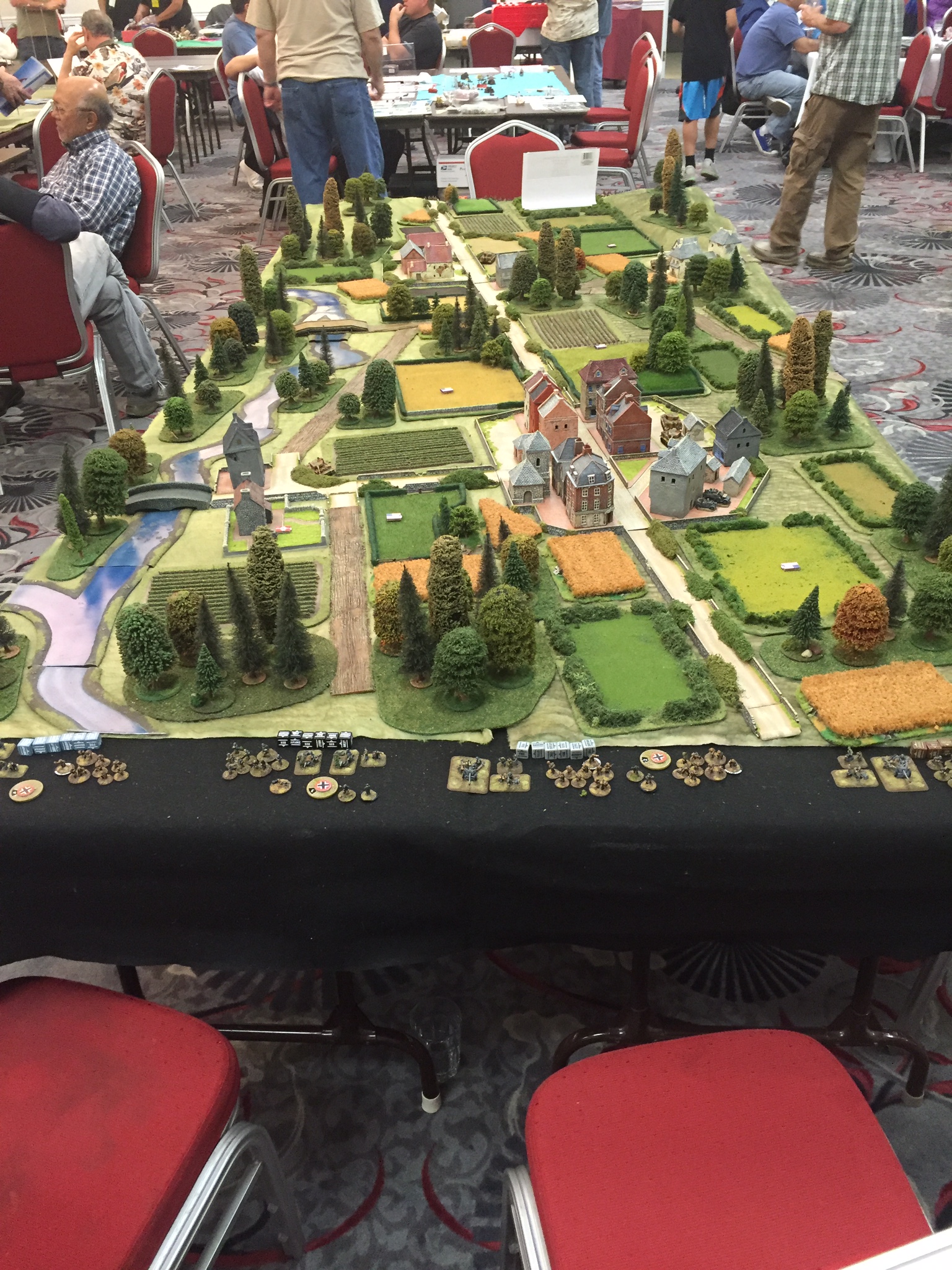 I hosted a game of Bolt Action at Conquest Avalon this past weekend. The table was 5 by 12 feet and saw two platoons of US Airborne dropping in on a Tiger Platoon supported by infantry. The following special rules were used:

Surprise Each of the four German forces will deploy from a specific barracks, using their own colour activation dice. By contrast, the four Airborne players will share a dice pool.

The intent is that this difference will create tactical flexibility for the US players and force the German players to a more reactionary role.

Confusion Two uniquely colored dice will be included in the bag. When the second is drawn, the turn will end.

In this way, not every unit will get to act in every turn. This is a mechanic borrowed from the Too Fat Lardies games.

Barracks German Tank Crews and infantry began barracked in nominated buildings. In this way it would take the German tank crews two moves to activate their Tigers – one exiting the barracks and a second entering their tank.

This effectively gave the Airborne a chance to take out the crews or the tanks prior to them activating and ensured no tanks until the third turn.

Prepared positions German support weapons (MMGs and Anti-Tank guns) are able to deploy anywhere within 12 inches of their barracks and can shoot, move or go into ambush on the turn they deploy.

This represents the support weapons being set up in advantageous positions to cover the approaches to each town/farm.

Air Drop The US Airborne will deploy randomly to one of 6 drop zones numbered 2-7. Whenever a US activation dice is drawn the US players can activate a unit on the table per the normal rules, or deploy a unit to one of the drop zones. First select the unit, then roll A D8, if a 2-7 is rolled, the unit will deploy to the correspondingly numbered drop zone. If a 1 is rolled, a German player will choose the drop zone, if an 8 is rolled the US player will choose. Next, roll 2D6 and the order dice to determine scatter distance and direction from the drop zone. If the result is greater than 7 or a double, the unit is placed that distance from the drop zone marker and ordered Down. If the distance is 7 or less and not a double, place the unit that distance from the drop zone and give it an order as normal.

The intent of this rule is to simulate the chaos of an air drop but still give the US players the opportunity to seize objectives quickly.

Here are some photos: On the second day, we played a tank battle on the same table. Here are some photos of that.